On this developing page Paul will explain the tunings he uses, the keys in which his recorded songs are performed, some particular techniques, and perhaps a little bit about gear.

To start with, tunings.
I very rarely use a capo for performing, because I like to have access to the full range of the guitar, especially the low notes. In the following notes about keys, all are played without a capo unless specified.

Open G tuning (DGDGBD low to high)
Some of Muddy Waters’ early slide guitar songs use this tuning, Howling Wolf used it for ‘Little Red Rooster’, and it was a favourite of Charlie Patton and Robert Johnson. Lowell George of Little Feat used open A, which is the same but a whole tone higher. Ry Cooder has said that he uses this tuning (often with a capo) for playing chord parts, but prefers open D (Vestapol) for slide. And it is the tuning Keith Richards uses for ‘Honky Tonk Women’, ‘Brown Sugar’ and other classic Stones numbers.
Sometimes known as Spanish tuning, apparently in reference to a popular song in the early 1900’s called ‘The Spanish Fandango’. This was the first altered tuning I remember experimenting with. The middle strings (4-3-2) are the same as standard tuning, which is a useful reference point, both for working on melodies and deriving chord shapes. Once I became comfortable using this tuning in the natural key (ie G), I experimented with playing in different keys. The dominant (D) is the easiest to start with, as the new key chord is at the 7th fret, chord IV is now the open strings, and chord V is at the 2nd fret.

Open D tuning (DADF#AD low to high)
Sometimes known as Vestapol, (after an early song about the Battle (or Siege) of Sebastopol), this is the tuning Elmore James used for most of his recordings. It’s featured on recordings by Blind Willie Johnson, Son House, Charlie Patton and Robert Johnson. Duane Allman used it a tone higher as open E, and it is the most common open tuning for electric slide blues, as D or E; for instance, George Thoroughgood and numerous others.

G drop C (CGDGBD low to high)
This is a variant of open G, dropping the lowest string by a tone in the same way that Drop D is a variant of standard tuning, and is known in Hawaiian music.
PJ recordings
Person to Person album
‘Ain’t Asking For Much (key C)
Love and Hard Work album
‘Backbeat Boogie’ (key C) (also video)

D Jazz (EADF#AD low to high)
This is my name for a variant of Vestapol which raises the lowest string a whole tone. This gives the same configuration as standard tuning for the bass notes, while keeping open D for the higher strings.
PJ recordings
Person to Person album
‘Home in the Woods’ (key B)
Love and Hard Work album
‘All I Need is You’ slide parts (key B) / ‘Leaving’ Early’ (key F#) / ‘Catcall’ (key E) / ‘Blues for LEJ’ (key G) / ‘Devil By My Side’ (key A) 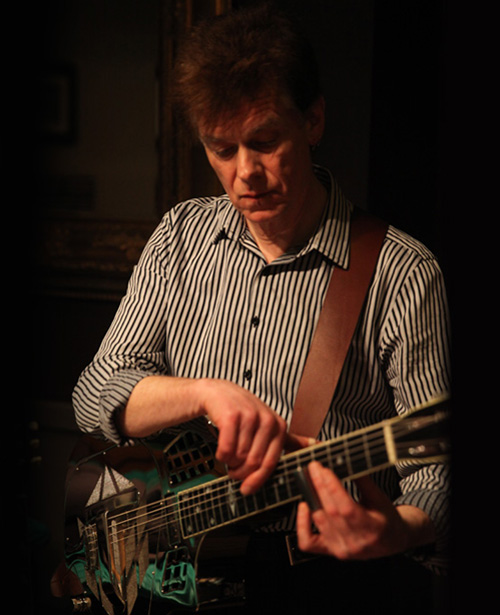